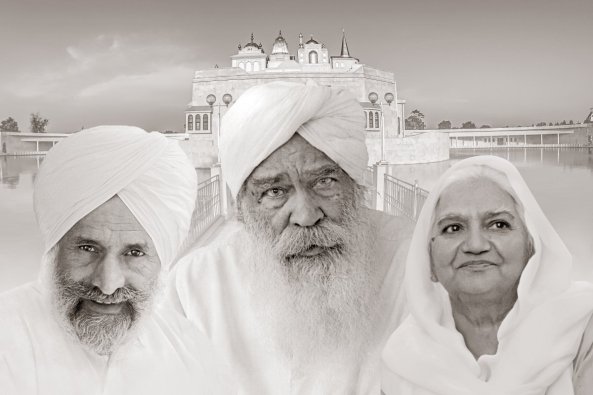 The whole text can be read here:

Guru Nanak has extended a loving invitation to all. The Master tells us that we have a purpose in life. Have we ever cared to think why we have been granted this physical existence? Human birth is really a great blessing. Man is the roof and crown of all the creation. Man is a rational being, and this is what differentiates man from the rest of the creation. He has been gifted practically with the faculty of discrimination to distinguish between right and wrong. It is for him to make the best use of his intellect and develop in him consciousness of the soul, which is lying dormant at present. Guru Nanak, therefore, reminds us that to attain Amrit, the divine nectar or the water of life, we should go to a living Master, who has access to the spiritual fountainhead and is competent to lead us to it. The living Master enjoys a supreme status. He is the very life and light of humanity. “Son knows the Father and those whom the Son reveals,” says Christ. The Master-souls are the children of light and come to diffuse the holy light among those who come to them. The Vedas pose a pertinent question: What is that thing having attained which one is fully satisfied and desires nothing else? And then go on to explain that the crown of life is the realization of God, attaining which one enjoys perpetual bliss and harmony. Soul is a conscious entity. It is a drop of the ocean of all-consciousness. It is gifted with all the attributes of the Lord. Kabir tells us that it is of the same essence as that of God. Muslim divines regard it as Amar-i-Rabbi, or the essence of God. It is due to the misdirected attitude of mind that it is overtaken by wild passions. So, when the soul is analyzed from the body and liberated from the meshes of the mind and matter, it can, once again, wing its way to the elixir of life within. It is the holy Naam – the holy Shabd or the audible life stream that the Master reveals to those who come to Him. It is the central theme of His teachings.

You may better understand it through a parable. Criminals are sent to the prison to serve their allotted sentence. A dignitary goes there and finds that the prisoners do not have adequate living quarters. He sanctions a large amount for the construction of good ventilated rooms for them. Another one goes there and discovers that the food for the prisoners is no good. He allots more funds for this purpose and the inmates are served with good food. Both of them have done a good deed, each in their own way. Another man – the master of the prison – goes there with the prison keys in his hand. Out of compassion he opens the prison gate and allows the prisoners to escape if they like. You will agree that the last man has done a magnificent service by providing the prisoners an opportunity to be free again. The world is a large prison-house where each one of us is serving his term, the allotted span of life. We are mightily engaged in the various pursuits of life with no knowledge of the free life beyond the prison walls. The Master has the key into the realms beyond; and when He comes, He throws open the door of the prison-house and invites us to take our chance of breathing the free air outside. Those who take the chance are blessed indeed. In the succeeding verses, we will know of various factors that qualify a person to gain liberation for the soul.

Leave off artificiality, all outer forms and thy wit, for in duality and uncertainty you cannot get any spiritual benefit.

The Master tries to pull us out of our deep slumber. In compassion, He shows us the way to freedom. He asks us to simplify our life. It is a blessing to be born in a temple, but a sin to die in it. Just as discussed earlier, it is necessary to remain in the religion to which one belongs; but while remaining there, one must learn to rise above all religious and social barriers, expand the self so that it embraces the entire humanity, nay all the creation, and realize the principle of the fatherhood of God and the brotherhood of man. Once a person rises above body and bodily limitations, blinkers fall from his eyes and he sees his Self in all and all in his Self. All the narrowing prejudices of nationality, race, and tribe sink far below, for now he belongs to the one great family of man. We take up certain religious beliefs with the purpose of spiritual enlightenment; but after some time, we find to our regret that we are bypassing the very purpose of life and are caught up in a vicious circle of forms and formalities. One must be cautious to see which way the wind blows and how he is faring. Again, I want to emphasize that the basic concept of all religions – spiritual enlightenment – should never be lost sight of. We must keep the bull’s eye constantly before us if we are out to be a good marksman. A lover of the Lord must, therefore, love God with all his soul, with all his mind, and with all his might. Too much of formalisms and formalities will necessarily bring in doubt, suspicion, and duality. There is a world of difference between an intellectual and a spiritual man. The two are poles apart. A philosopher deals with theories, while a mystic deals with the reality alone. Hence the need for disenfranchising the self from all limiting adjuncts that keep the soul smothered under the dead weight of rites and rituals.

O mind, be thou still and not run into the wilderness.

It is in the stillness of the mind that one can see the face of divinity. A close study of the subject will show that the mind is generally in the grip of the senses and the latter are helplessly rushing out into the fields of sense-pleasures. In the Hindu mythology, soul is described as riding a chariot of the body with intellect as its driver, the mind as reigns, and the senses as powerful steeds which are whirling it restlessly into sensual enjoyments. So the first step for a spiritual aspirant is to control his senses and save himself from falling unwittingly as prey to the temptations. It is said that we receive 83 percent of our impressions through the eyes, 14 percent through the ears, and rest of the three percent through other organs. Just see how needlessly we are rushing head long into the wild drama of life! The Master not only guides us on how to free ourselves from this captivity, but actually offers a better substitute to the mind in the form of inner light and sound current or the music of the spheres.