Today we learn something about Unity of Man, its aims, founders and headquaters.
Peace and harmony in your heart.
Didi

Unity of Man is working as a spiritual, cultural and charitable non-profit-organization

The movement was brought into being by Sant Kirpal Singh who taught the ancient path of self-knowledge and God-knowledge and was worldwide esteemed for His untiring commitment to create a spirit of brotherhood and peace. In 1974, Sant Kirpal Singh convened the first “World Conference on the Unity of Man” in Delhi. This impressive conference became the starting point of the movement which was carried on by Dr Harbhajan Singh and his wife, Mrs Surinder Kaur.

The name Unity of Man refers to the inner unity of all life. Just like the sun and the sunrays are in perfect union, the same way God is not separate from His souls. We are drops of the ocean of all consciousness, whom we worship as the same God, calling Him by different names. The human body is the true temple of God, and the human form provides us with a golden opportunity to realize Him.

To fill the human heart with compassion, mercy and universal love,
which should radiate to all countries, nations and peoples of the world.
To make a true religion of the heart as the ruling factor in one’s life.

To enable each one to love God, love all, serve all,
and have respect for all, as God is immanent in all forms.

My goal is that of oneness. I spread the message of oneness
in life and living. This is the way to peace on earth.
This is the mission of my life, and I pray that it may be fulfilled.

In this spirit Unity of Man is committed:

– to explain that spiritual achievement has nothing to do with occultism, supernatural powers and esoteric practices which on the contrary are hindrances on the way

– to support people in need, following the motto ‘help for self-help’ – at present focused on the area of northern India 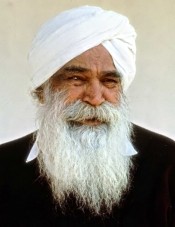 Words cannot do justice to a personality like Sant Kirpal Singh. Esteemed worldwide as a great Saint of the 20th century, embodiment of kindness and mercy, He gave out the living knowledge of the true nature of man whose aim is to return to his origin – God, and emphasised the value and dignity of each individual as a conscious being or soul. Sant Kirpal Singh did not teach any new faith. He treated the subject of spirituality as a science.

Commissioned by Sant Kirpal Singh to carry on His work, Dr Harbhajan Singh dedicated his whole life to the service of humanity and built up the Project Kirpal Sagar. His example inspired others to lead a life with higher values. Born on 10 December 1932 in Laaylpur, situated at that time in India before the partition, Dr Harbhajan Singh met Sant Kirpal Singh in 1961, after years of intense search. 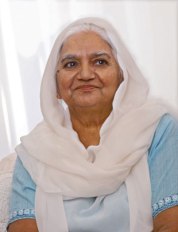 Mrs Surinder Kaur, president of Unity of Man India, was born in 1940 in the village of Bhawalpur, where she grew up with two brothers and three sisters. The name of her mother was Paronie Kaur, and that of her father, Katar Singh. He was a freedom-fighter, a courageous and broad-hearted character, who supported the needy with the means he was able to save when they had to flee to eastern Punjab during the partition of India.

17 comments on “About Unity of Man”