Most of us know how the Bible begins: “In the beginning was the Word, and the Word was with God and the Word was God…” – it is not just a word, but it is the God into expression power in the Word. Please, read what Sant Kirpal Singh has to say in this connection: 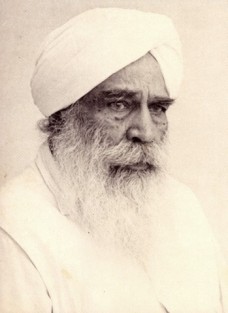 In the photo: Sant Kirpal Singh

The treasure of Naam

The Absolute God is Wordless, Imageless and Nameless. When it came into being, it was called Word or Naam.

“Naam” is nothing more nor less than Godhood of God; one may call it what one may like – the Holy Spirit, the Comforter, etc. It is the primal manifestation of God, responsible for the entire creation. It is the primeval form of God.

In these memorable words, St. John has tried to give us some idea of the marvellous nature of the Word or Naam, as it is also called. It combines in it the triple principle of Creation, Sustenance and Destruction-the Trimurti of the Hindu mythology of Brahma, Vishnu and Shiva-the Creator, the Preserver and the Destroyer respectively, all the three deriving their motor power from Godhood or God-in-action, Naam or Word.

Hazrat Moieen-ud-Din Chishti, in this context, says, Name and the Named are but one, Light of Name witnesseth His glory. All that is, is of and from Naam, for it pervades everywhere. It is the life principle of the entire creation. He in whom this Word or Naam becomes personified is called a saint for it is said that, “Word was made flesh and dwelt among us.” Such a one has reached the summum bonum of life and gained the El Dorado of human existence. For him there is nothing more to wish for and aspire for.

Naam: What it is

All scriptures speak of Naam but have not been able to say adequately what it is. It is impossible to define and delineate it in words. It may be described as “Life-impulse” or “Conscious-principle.” When it begins to vibrate, it produces melodious sound, which is termed Naam or Shabd. This Sound Current proceeding from the Deep Silence of the Formless Kutasth is responsible for all forms and colors, visible and invisible to the naked eye. All life hangs on this Life-principle. No life can exist without Naam. The Sound-principle is all-pervading; it may or may not be felt, yet it is reverberating from top to toe. It is the Kernel and the Essence and at once both the material and efficient Cause of the endless universes in which this physical earth is but a speck.
0 Pipa! This universal vibration is the Primal Causeless Cause, but can be apprehended only through a Master-soul.

In all religions God is spoken of as the Sound-manifest or Life Principle. It is a current, live and conscious, and has in it the germs of creation. It is because of this link between the Creator and the creation that the spirit or soul of a person can cross over the physical body and traverse the spiritual regions to reach the True Home of our Father-Sach Khand.

Greatness of Naam and its needs

The access to spiritual regions cannot be gained except with the wings of Naam.

A Persian poet says,
It behooves thee to fly to the higher realms and that thou canst do with the wings of Naam.

Again, If thou wishest union with Truth, thou must get united with Naam (i.e., Word or the manifest form of Truth unmanifested) for therein lies the only possible union with Truth.

All Saints spoke about Naam, Shabd or Word

The Path of the Naam is the most ancient and the most natural. It is in consonance with the Divine Law. In all the four ages, it had acted as a saving lifeline for the people.

The Muslim divines have been practising and preaching the Path of Kalma for fourteen hundred years or more. The Prophet Moham­med, Shamas Tabrez, Maulana Rumi, Hafiz Sahib, Moeen-ud-Din-Chisti, and others taught this very thing.

Again, two thousand years ago, John, the Baptist, and Christ laid down the Path of the Word or Logos. Zoroaster long before preached of Sarosha or the Sound Current in Persia. Lord Buddha, twenty-five hundred years ago, practised this very sadhna (spiritual practice).

Four thousand years back, we find that in Egypt it was known as the “Path of Aton” which was preached by King Echnaton. In the Upanishads we find references to Udgit or the Harmony of the Beyond. Lord Krishna, long before, was fully conver­sant with this science. In the Vedas, the oldest scriptures of the world, we read in Wak Devi Sikat of Naad or music and Sruti or that which is heard. Kabir Sahib tells us that He came in all the four Yugas, and every time He preached of Naam or Word.

8 comments on “Treasure of Naam or Word”